Imagine that you have a beautiful unmarried daughter that you love very much and to set her on her way you give her money to buy her own house. She does well for herself and the family is very happy for her. During this time the daughter indicated that she is so thankful for the monies given to her to buy the house that she thinks it only fair that if she pre-deceased her mother or father, the house must go to them.  Things go even better when she falls in love with a young man. Before the wedding they obtained legal advice and entered into marriage with an Ante Nuptial Contact:

Presumably the daughters mother and father felt satisfied that her investment is safe in the event that the marriage fails.

Disaster struck when the daughter dies within a month of the wedding. The husband gets appointed as the executor of her estate and in turn appointed Accounting and Tax Consulting CC to attend to the administration of the deceased estate. In due course the agent submits the Liquidation and Distribution Account (L&D) which is approved by the Master. In this L&D the house is distributed to the father of the deceased. This was done on the argument that their Ante Nuptial Contract clearly excluded the house from the accrual system. It was therefore argued that it was her clear intention not to let he husband share in any proceeds of the house on dissolution of the marriage.

The husband did not take kindly to this and asked that the L&D be set aside on the basis that it is incorrect because his wife died intestate and that he was the sole heir in her estate, inclusive of the house.

In Radebe and Another v Sobiso NO and Others (2011) JOL 26931 (GSJ) it is the disposition of this asset in the deceased estate, the immovable property, which has given rise to the present dispute. In the court a quo his application was upheld, the liquidation and distribution account was set aside and transfer into Mr Sosibo's name was ordered. The parents of the late Mrs Sosibo, Mr and Mrs Radebe (respondents in the court below), now appeal that decision.

“The Matrimonial Property Act has made it clear that the matrimonial regime chosen by the spouses has no bearing on any right to succession by a surviving spouse from the estate of the first dying.  The application of the accrual system and the calculation of any accrual has no bearing on the right of either spouse to inherit from the other, either by way of intestate succession or under a will.”

Much reliance has been placed by both parties on their purported comprehension of the "intention" of the late Mrs Sosibo. However, I have much difficulty in accepting that the clause contained in the ante nuptial contract contains any testamentary disposition of this property to Mr and/or Mrs Radebe. The effect of this property exclusion clause was, inter alia, to protect her own interests as a potentially divorcing spouse.

By excluding the immovable (or any other) asset from the accrual in the ante nuptial contract, the late Mrs Sosibo did not give any indication that she divested herself of that asset in favour of her parents or anyone else nor did she give any indication that she bequeathed that asset to her parents or anyone else upon her death. This is not a divesting or transferring or devolving clause at all.

I can see no merit in the submission that Mrs Sosibo did not die intestate. There is no document extant which purports to dispose of her estate or part thereof on her death to named heirs or legatees.

Therefore, it was found that Mrs. Sosibo died intestate and that her husband was the only heir.

According to Adv. Carstens, Chairperson of Stellentrust, “parents of intended spouses, should advise their children to obtain advice on their Ante Nuptial Contract AS WEL AS a will to ensure that effect is given to their wishes should they divorce or die. In the present case much distress and financial embarrassment could have been avoided had the intending spouses executed separate last Wills and Testaments. It is appreciated that there are costs involved in embarking upon two legal processes, but litigation such as this could have been avoided had Mr Sosibo and his late wife taken these steps. Even young adults, married or unmarried, should have a will and we would gladly assist with the drafting thereof.”

Wills: The devil is in the details

A lot of people, entrusting their last wishes to the drafters of their wills, don’t understand most of the legal jargons the drafters use. Nico Botha, CEO of Stellentrust, says “……… most people get a will they don’t read, don’t want and don’t understand”. After working a lifetime to amass some assets, people sometimes see the cost associated with the drafting of a will as a “grudge payment” and approach service providers for a so-called “free standard will”. While this is for free, it sometimes is done by way of a questionnaire filled in by the applicant. There is therefore no consultation with a fiduciary specialist to ensure that the applicant fully understand the legal effect of what is contained in the “free standard will”.  According to Nico, he has never seen a standard one-fits-all will.

Even our courts have commented on bad draftmanship when Judge Leach in Raubenheimer v Raubenheimer (560/2011) 2012 ZASCA 97 said the following:

“It is a never-ending source of amazement that so many people rely on untrained advisors when preparing their wills, one of the most important documents they are ever likely to sign”. Further on in the judgment the learned Judge strongly recommends that clients should “…. consult only persons who are suitably trained in the drafting and execution of wills and other deeds containing testamentary dispositions”.

The result of a will drafted by a completed questionnaire, might have unintended consequences that the drafters might not be aware of due to the lack of information.

Nico Botha points out that such a drafted will, in isolation and on the information given in the questionnaire, might on the face of it look adequate but might leed to unintended consequences.  “The key-critical issue in all planning, structuring and review is understanding the whole and the parts that comprise the whole as well as the interdependency between those parts. It is dangerous to plan, structure and or review only one part in isolation and often leads to unintended consequences”.

We therefore strenuously advise everyone to appoint a suitably qualified Fiduciary Service Provider who is also an Estate Planner to advise on and draft a will that gives effect to the clients last wishes. Existing wills must also be checked once a year to establish if the client’s circumstances are still the same. Divorce, death, birth, marital problems, new business started, retirement etc. might have an effect on your intentions as expressed in your will and therefore need to be amended. This is usually not an expensive exercise but might save your intended beneficiaries a lot of problems.

Please feel free to contact Stellentrust if you need advice or assistance on the drafting of a will or in the planning of your estate. 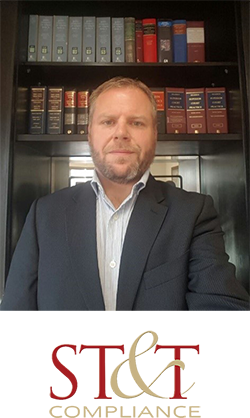 Stellentrust is happy to announce the opening of ST&T Compliance (Pty) Ltd, a subsidiary of Stellentrust Holdings (Pty) Ltd, specialising in Tax Compliance, Independent Trustees, Cosec, accounting, legal consulting and all related compliance issues. Hendrik van Deventer was appointed as the Chief Operations Officer and as a Master Tax Practitioner, with over 20 years’ experience, he is well qualified and experienced to assist you with any compliance issue i.e. Special Voluntary Disclosure Program in the event that you have undisclosed overseas assets.

Hendrik is the former Head of Tax at BoE Trust and have been in private practice since 2013.

Hendrik has a proven ability to establish and nurture enduring commercial relationships with clients and key stakeholder bodies – creating brand value. He has also served on the South African Institute of Tax Professionals National Tax Technical Committee and Regional Committee in the Western Cape.

He is a published writer, having been published in TAXTalk and Personal Finance and he is also a regular contributor on Social Media platforms.

Hendrik actively supports community development, particularly focused on youth development and promoting "trade from aid" and serves as a Board member on the Aid 2 Trade Foundation.

Feel free to contact him on hendrik@stellentrust.co.za for all and any compliance matters i.e.: